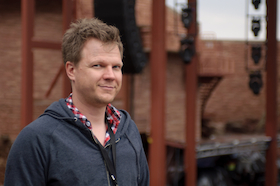 Mix Magazine sat down with me at the iconic Red Rocks in Colorado, to talk in depth about my work as front-of-house engineer for the Gotye world tour 2012. Below is an excerpt, read the entire interview here.

Running sound on the tour is Lachlan Carrick, who started his career as a teenager and has now been mixing for more than 20 years. The summer swing is Carrick’s second tour with Gotye.

“My dad was a musician and I would go to his gigs, and often the only place I could sit was the sound booth, so I got interested in audio that way; I’ve never had a real job,” Carrick laughs. “I also work in other areas—some experimental theater, for example—and I spend a lot of time in the studio. It’s somewhat of a rarity to come out on a long tour like this, but I am really enjoying it.”

Gotye is running a full production rig for the tour. At front of house, Carrick sits at an Avid Venue Profile. “Eighth Day Sound is supplying the gear for this run in the States, so it’s my first night out with it here at Red Rocks,” says Carrick. “The Avid console suits the way I like to work very well. I can make a whole bunch of different sounds with it, then easily automate them, which sounds simple, but the Venue platform takes automation to a whole new level above other digital consoles I’ve used. And obviously, everyone says it, but the TDM plug-ins sound amazing, and are fully integrated. When you’re used to using them in the studio, and the artist is used to using them in the studio, it’s great to be able to apply them in this situation.”

Carrick uses roughly 48 inputs at FOH and employs many different plug-ins out front, preferring them at this point to outboard gear. “The latest thing I’ve been getting into is the Waves Non-Linear Summer, which is a pair of tools that emulate classic console channels and their master buses,” he explains. “They have an SSL, an EMI and a Neve; all these channels are modeled individually from particular consoles. The Drive function is outstanding. I have the NLS channels running on subgroups, and then also the NLS bus over my L/R mix. I mainly use the EMI-style drive on this show, but it just feels like a really nice way to add some extra level and some subtle juice to bring things forward. You can sculpt the way the midrange dynamic works in particular. Great stuff!”

Comments are closed, but trackbacks and pingbacks are open.